What is Augmented Reality?

Augmented reality is a technology which enhances or visualizes an object when seen through a gadget like mobile.The Image when viewed through the app in mobile or tablet comes to life (animated).And is in sync with the object in reality.For example if you have an image and you view it through the app to augment if you move the image in real the augmented view on device will move accordingly.

Augmented reality is the next generation technology and is making a great impact already in many fields.Taking the education or play in consideration.It makes the screen time more interactive.Learning through touch and interaction is known to have deeper impact. augmented reality in play and education is providing that interactive way of learning.

Read this excerpt from National Geographic on Augmented Reality

Some scientists contend that screen time may rewire the developing brain, hinder cognitive abilities, and cause behavioral problems. But unlike other forms of digital media, “the primary activity in AR is interacting with the real world,” says Chris Dede, a professor in learning technologies at Harvard University.

How to use augmented reality for educational based play?

So now the question arises how to make the augmented reality work for us and impart knowledge and make the screen time effective.

Being born in the age of gadgets no doubt these little ones have extra flair over the gadgets, and hence technology serves as the best nanny.But all said and done technology has its own loop holes and as a parent instead of using it as nanny we need to use it wisely.

Augmented reality games like Play Shifu are interactive and hence can act as a great source of learning when played in moderation.

It is always advisable that you administer your kid while they use gadgets like mobile or hand them over with limited access or app lock, So that they can’t access something which is not meant for them when left unattended.

Our experience with augmented reality and review

Whats Inside the box?

How to play Shifu Wildlife ? 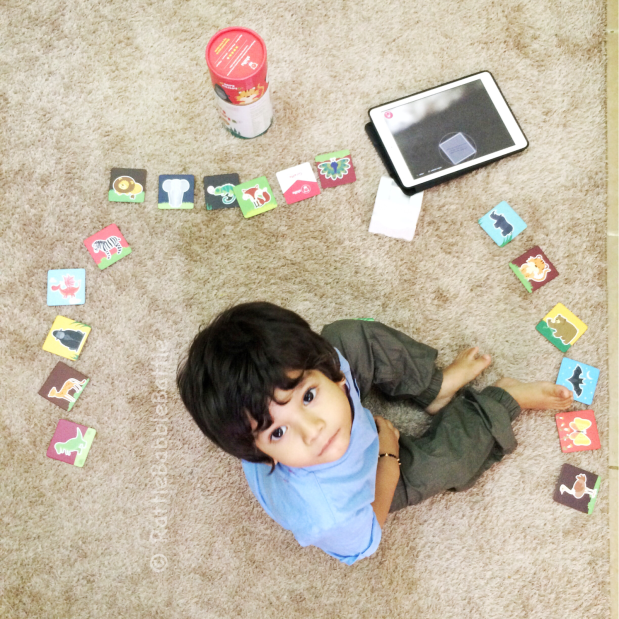 This was the first time Nirvaan was experiencing something like this so we were pretty excited to see his reaction on this particular game.Animals are his favourite and I was sure he would be happy to see the flashcards.

The app was launched and while it took sometime to launch probably 2 mins Nirvaan was impatient and constantly asked why is it not working (lesson learnt download and launch before presenting it to your kid).

And once it was launched his father showed him how to place the cards and see the animals come to life in the screen.There was no stopping after that.He is currently in his I can do it all phase, so we took a back seat and he was busy shouting the names of the animals he knew and asking for those he didn’t.

Then after few days we again played Shifu wild life but this time we played and learned about the natural habitat and sounds.

The other day he played the feed me quiz and he loved and found it really funny when the automated voice said No or that’s tasty.

He is too young for the fun spelling game hence gave it a skip for later.

The library mode is a nice way to browse through without using the cards.

The reason I introduced him the game step wise is simple

If you liked this please don't forget to share

Hey there this battle is my journey of motherhood.
I am a banker by profession but currently a stay at home full time momma to my boy and not so good home maker to my hubby.